Zinash Abebe, 45, is a brave fighter. She has fought for a good cause. And, more interestingly, she has emerged triumphant in all accounts. The selfless combatant, a mother of eight, has made all the difference in the lives of her communities. “I am happy that we have made it that far. I really feel honored in serving my community. I am still committed to do more for them,” Zinash says proudly.

Uncovering layers of the story

Zinash was born in Jimma zone of Oromia region. She grew up there. She got married and moved to North Shoa zone of Oromia region. She has settled in Gadula Moye kebele of Abichugna’a district. Here she gave birth to eight children. And it is here where her husband and her two children passed away. Further fascinatingly, this is where Zinash cultivated the fighting spirit – a determination to tackle the challenges of underdevelopment of which lack of access to safe water and improved sanitation and hygiene services was the priority. 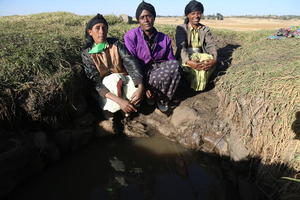 Zinash and her community – Dabaro and Gara Mojo Village of the same kebele – had suffered tremendously from lack of access to safe water. They used to drink unsafe and dirty water from the spring located in an open area near the main road. Literary, the spring is also the only source of water for all living things including domestic and wild animals. “All kinds of beasts were drinking from this sources. We also drank with them,” says Zinash in explaining their dire situation during the pre-intervention period,

Obviously, that resulted in widespread waterborne diseases. Diarrhea was the most common of all. Particularly, Acute Watery Diarrhea (AWD) that frequently recurred led to loss of lives over the past years.  Zinash is a living example of this suffering. She lost her two children to acute watery diarrhea. Dishearteningly, both deaths occurred in 14 days. “My 8 years old daughter died due to acute watery diarrhea. After 14 days, my son of 4 years old died of the same reason. I didn’t know that this disease was due to lack of safe water until I was told so,” says Zinash who also lost her husband some years earlier due to sudden death.

Zinash losses are gruesomely painful even to imagine leave alone to bear. Except for her husband whose cause of death remained unclear to her till this day, the death of her two children was attributed to lack of access to safe water. Such heartbreaking losses of this nature had not only happened to Zinash. Most of untimely deaths, particularly those of children, were related to waterborne disease in one or another way as Zinash’s account.

Another disturbing challenge related to this unprotected spring was that its yield decreased significantly during the dry season. In cases such as this, users had get to the spring as early as 3 a.m. to be among the lucky ones who fetch water before it completely dried up for the day. Once the yield totally run out, the spring needed a day or so to recharge and start flowing again. It is during this period when women, the usual bearer of the burden of collecting water, run into baffling dangers. For example, once  Zinash was fetching water from the spring at around 3 a.m. As she emerged from the gully spring, she saw a hyena who was coming to drink from the spring. Her immediate reaction was to squat down there in the valley of the spring. But then she realized that it was exactly coming there. “Horror took over me. I could not breathe and move. I thought I was going to die. But, a dog saved me. The dog started barking at the beast who, as the result, stopped walking momentarily. Then I left my jar there and crawled away from the spring,” Zinash recalls the deadliest moment of her life. Such life threatening moments was not a news in this village. It was, rather, a day to day occurrence.

A river, approximately 3 hours away from this community, was the only nearest water source for those who were not able to make it to the spring before it totally dried up for a day or so. In this instance, the agonizing experience of the women who had to carry a clay jar filled with water on the back all the way home for the duration of 3 hours is everyone’s guess. On top of this, preparing food for family members early so that they can go to work at the earliest possible time was another great challenge for the women.

The push for solution button 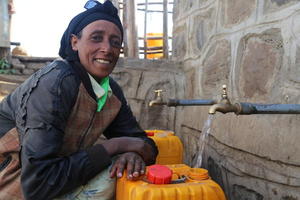 The ugliness of life took its toll on this community. It reached at the stage where the community would normally say, ‘we cannot take it anymore.’ But they still had no idea what to do. As their previous request for access to safe water fell on deaf ears, they were not totally sure what Kebele Administration would do differently this time. So the community developed an inclination to accept that this is their fate. But not Zinash Abebe. She was not warded away by the lack of favorable response for Kebele. She has learned to believe that ‘sky is the limit.’ Since her losses, Zinash taught herself not accept ‘NO,’ as an answer. She found inspiration and courage in her losses. An earnest impulse to tackle the unfair life style of her women compatriots was another source of determination for Zinash.

Zinash, who has already developed a good rapport at Kebele and District administrations through various campaigns, decided to take the baton of fighting for access to safe water. First, with conviction and determination, Zinash motivated and mobilized the community to apply for the provision of access to safe water supply scheme via Community Managed Project (CMP) – a rural safe water supply implementation approach in which users are in charge of planning, executing and managing their project. Then Zinash, along with six others, was elected to the membership of Water, Sanitation and Hygiene Committee (WASHCO) late 2013. The members of the committee elected her to chair and represent them. “I was elected unanimously. Community’s trust on me was another reason for my determination to fight for them,” says Zinash.

The committee, as spearheaded by Zinash, started mobilizing resources. As per the CMP approach criteria, the community contributed 1200 Birr as upfront cash - the total amount that cover the maintenance and operation cost of the safe water supply scheme for at least a year. Then the community, through their representatives submitted application for access to safe water supply early 2014 to the district. With close follow up of the chairwoman, following successful rounds of appraisals, the project was approved for the community. 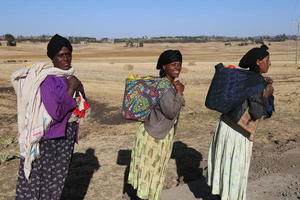 On this day, safe water was seen in the village for the first time ever. The community has gained a provision to access safe water. According to Kebede Zeleke, WASHCO’s secretary, the jubilation and excitement on the inauguration day was bubbling. Thanks to Zinash for unwavering commitment, the sparkling new life chapter for the community was wide opened. The community and committee have not stopped after constructing the water supply scheme. They wanted to construct a washing basin. Now, the community also have washing basin at the communal water supply scheme.

With an objective to maximize the health benefits of having access to safe water, WASHCO push the users to construct a toilet for each household. “We developed a bylaw in which the community agreed that a household who has no latrine should not use the new water point. So now every user household constructed the latrine” says Zinash. Consequently, at the time of this visit, the village is Open Defecation Free (ODF). Though the verification certificate from the district is still pending, the kebele is said to be ODF.

Since the provision of access to safe water and improved sanitation and hygiene services, the number of people diagnosed with waterborne diseases has dramatically decreased among the users. So is the burden of the medical cost. It was reported by those interviewed for this case story, that the community is much healthier than it was before the intervention. Viewed from the economic perspective, women have got enough time to contribute to raising the household income. Now when the new water point is closer to the community, they have time to prepare food and send their family members to work in time. According to Aregash Abera, user of the safe water supply scheme, now they can send kids to school in time.

The woman who lost a lot - and hope subsequently - to unsafe water, avenged herself and the community by enabling access to safe water and improved sanitation and hygiene services. She has achieved the targets she set for herself. The once grieving and dispirited widow has become the prodigious crown queen of her community. Zinash has led the community with example earning love and respect in the process. Generally, she has set a standard by breaking the ‘hard ceiling’- a notion that ridicules women leadership in the community.