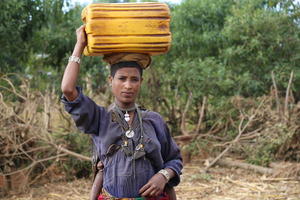 It was the afternoon of 26 November 2014.  A team from Community-Led Accelerated WASH (COWASH) Project paid a visit to Gult-5 community of Yeloma kebele, Bahir Dar Zuria district in Amhara Region. There a woman with two years old son on her back was enthusiastically meeting and welcoming the team. She is known with the name Yelibe Yibelu. “I don’t know my age for sure. It may be 25? Or it may be more. Do you think I am in 30s?” says Yelibe who even lost the track of when she got married.

She has never been to school, but she is vigilant and charismatic. It is this character of hers that the Gult-5 community is attracted to, when they needed someone who can responsibly take care of the water point. Yelibe not only fits the criteria but also comes top of the contest to become the guard of the water.  Without the second thought the community selected her for the post in September 2014.

It was a responsibility that Yelibe was assuming for the first time. She is well aware of the challenges associated to the post.  Taking over the responsibility which is traditionally considered as man’s job has never scared her off. “Previously it was my father in-law who was the guard of the facility. He decided to retire. The community selected me in his place. I am committed to stand up to the challenges ahead.” says Yelibe.

Running the facility regularly and smoothly is her major responsibility. It’s not only about opening the facility twice a day but also making sure everyone gets water just as per the turn. Monitoring the cleanliness and daily functionality of every parts of the facility and reporting it to Water, Sanitation and Hygiene Committee (WASHCO) is the other responsibility that she attends to. “In addition to managing the facilities, I am also responsible in making sure everyone is equally served. Ensuring responsible usage of the water point is my main task,” articulates Yelibe, a mother of four children.

Yelibe, a straightforward woman, feels honored to be given the responsibility. Unlike many, she does not believe her role is just timekeeping.  For her, she is the ‘steward’ of the water point. By making sure the water point is used responsibly, Yelibe is helping a little more than 300 people have access to safe drinking water for many years to come. Undoubtedly, she plays major role in ensuring the sustainability of the project. “Contributing my part to keeping community drinking safe water for years to come is much more satisfying to me than that yearly salary,” says Yelibe who earns 300 Birr annually, approximately an equivalent of 12 Euro.

She fully understands the consequence if this water point stops functioning. They all go back to the old water source. It is an unprotected spring. It was the main water source until 2012, when the water point supported by COWASH was constructed.  “Previously we often got sick easily and repeatedly. In addition it could take us three hours waiting for our turn to collect the water from the spring,” recalls Yelibe.

Apart from this role of hers, Yelibe is a dedicated housewife and she impeccably manages the family business. She gets up early to prepare breakfast. Having eaten the breakfast her husband Terefe Muche goes to work in the field while her oldest son Fentahun, 12, who is in 2nd grade at Yeloma primary school leaves for school. Unfortunately Getahun, the second son, 9, no longer goes to school as he has to take the herds to the field. “Taking him out of school was a difficult decision. But there was no one who can look after the cattle,” says Yelibe. Gojam, 4, her only daughter, her youngest child Gizachew, 2, and herself open the water point every morning at six o’clock.

Yelibe and her husband are trying hard to make the ends meet. They own a small farm field and a backyard on which they grow cereal crops and fruits such as mangoes and oranges respectively. “We also owns a small khat (chat) which is harvested every other week. It helps us generate around 1000 Birr each year,” says Yelibe. Six family members - four children and parents - live in a single but very wide room partitioned into a living space, store and cattle pen.  It is a house with a roof of corrugated iron sheet.

She believes in making the future bright for her children.  She understands education is the only gateway to that. Having safe water in the village would help her, and the community, to send more kids to school. If the family needs the children to go to collect water, now they can do it within 20 min and get to school after that just in time.  For example, Fentahun has no difficulty in collecting water in the morning and going to school as the water point is so nearby.

Since safe water came to this village, Yelibe and her family have not got waterborne diseases. According to her, it is partly because now they have access to safe water.  It is also because they have latrine with hand washing facility and soap at the backyard. She confidently said that her household uses the toilet. Indeed it is an open defecation free (ODF) community.

Yelibe answered a call. She is determined to play her part in ensuring the sustainability of the facility. Doing so, she is not neglecting her duties in the household. She is at the top of the household business.