Welcoming officially the participants and wishing a successful capacity building training, Tesfaye Muleta, Deputy Head of Oromia Water, Mineral and Energy Bureau, emphasized the important role COWASH is playing in supporting the regional government to reach more people with safe water and improved sanitation and hygiene services. Currently, including the new ones, the number of districts (woredas) implementing CMP in the region is grown to 12.

During the six days training, the first three days were devoted to introducing CMP to the heads and experts of all concerned offices from these woredas and zones. The details of the implementation procedures were addressed in the last three days in which only Zonal and Woreda WASH experts took part.68 participants took part to the first session while the second session included 25 participants as it was more focused on enhancing the implementation capacity of these experts in CMP. 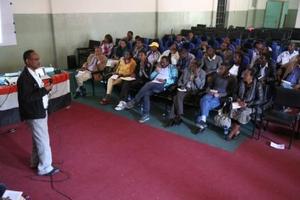 The training aimed to be as practical as possible and this approach was dubbed “fitting and interesting” by the participants who rightly earned the nickname ‘the most disciplined and attentive’ trainees by COWASH team who was facilitating the training.

The week long training came to conclusion after the trainees had identified the next upcoming activities and developed actions plans for the coming weeks leading to Water, Sanitation and Hygiene Committee (WASHCO) training which is expected to be organized on 7th of February 2015. Sharing this knowledge with other experts in their respective woredas and conducting community promotion in target kebeles are the major activities these trainees need to accomplish before the WASHCO training.

As per the plan document, a total of 261 new community water points are expected to be constructed in the new CMP woredas this Ethiopian budget year. Similarly, these woredas plan to reach 65,750 more people with safe water and improved sanitation and hygiene facilities by the end of this fiscal year. It is also in the plan of the new CMP woredas to construct 18 institutional water supplies in addition to 11 institutional latrines.

Ever since CMP introduced to the region for the first time in 2012/13, 77,263 people have gained access to safe water while 719 people have got their previous water supply scheme rehabilitated. Additionally 31 water supply schemes were built in the schools and health posts of the CMP districts over the last two years. In addition 13 new institutional latrines have been constructed in the target areas of the region in the last two years.