Oromia Community-Led Accelerated WASH (COWASH) organized a Review and Planning Workshop from 15-16 December 2016 in Sebeta City of Oromia National Regional State. This is the annual regional workshop for reviewing the performance of the last fiscal year and planning for the next fiscal year. More than 100 people who came from 12 districts, 5 zones and sector bureaus participated to the workshop. 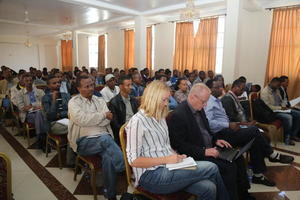 Gezahign Lemecha, the deputy head of Oromia Water, Mineral and Energy Bureau, who made an official opening statement, expressed his satisfaction with the progress COWASH made in the target districts and in the region in general. Referring to the  delay in planning for the current Ethiopian fiscal year, the deputy head also reiterated the need for a sense of urgency to make up for the lost period.

Arto Suominen, Chief Technical Advisor for COWASH, who also made opening remarks seized the opportunity to highlight the progress the region made over the last four years. Mr. Suominen also briefed the participants on the new features of the project for the next three years. In the next phase, priorities will be given to mainstreaming persons with disabilities and vulnerable groups in the implementation of WASH facilities. The Chief Technical Advisor also expressed the project’s target to empower women through introducing women-led micro and small enterprises in operation, maintenance and sanitation marketing.

The regional 2015/16 performance was reported and presented by Malkamu Dalju, Regional Support Unit (RSU) Team Leader. He reported that 8 of 13 human capacity building activities were conducted by the region. All but one of the planned human capacity building trainings at districts were conducted successfully. According to the annual performance report, about 1,120 WASHCOs were trained over the last four years. Over the same period, the project also trained about 302 artisans who are currently active in the provision of access to safe water in their respective areas.

Malkamu also mentioned that almost all of the planned procurements for the last 4 fiscal years were successfully done. With exceptions of a few rolled over procurements in Abay Choman and Horo districts of Horo Guduru Wolega zone, the procurement of physical capacity building goods for the last budget year was done as planned.

Similarly, as highlighted in the presentation, 46, a little shy of the planned 50, safe water supply schemes were constructed in as many schools. Another 4, one more than planned, school water points got rehabilitated. Currently, these schemes are providing nearly 30,000 school communities with access to safe water. Finally, it was reported that 14 health institutions got access to safe water supplies for the first time due to this intervention. The reported showed 4,123 staff members are benefiting from the facilities.

The progress in reducing open defecation practices has been slow. Only 20 kebeles of the planned 60 were declared open defecation free. The team leader also stated that only 14 and 13 latrines were constructed in health and school institutions respectively. Low priorities from all stakeholders at different levels seemed to be the main contributing factor for the underachievement. 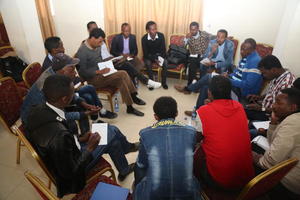 Last year’s budget utilization is not impressive either. Out of the allocated 36.8 million Birr, only 21.3 million Birr were utilized, which is 58% financial performance. Delay in the budget release was presented at the main reason for the underutilization of the finance.

The implementation of the WASH activities was hampered by a number of challenges mentioned during the workshop. Weak coordination among sector offices and bureaus was stated as the one of the major constraints that affected the effectiveness of the implementations. Lack of regular communication among members of Woreda WASH Team (WWT) contributed to the low performance of the activities. Particularly, the finance office’s unresponsiveness impacted the regularity and speed of the activities.

Reacting to this challenge, Gezahign Lamecha, said that his bureau, along other stakeholders, is diligently working to tackle the poor integration among sector actors. “Naturally the WASH issues are one and the same. It is we who are disintegrated. It is impossible to address them separately. So to ensure access to WASH services, we should be integrated,” says Gezahign who is only weeks into his new position.

Another challenge that slowed the speed of the implementation is the political instability that engulfed the region in the last fiscal year. The instability not only affected the implementation of the activities but also restricted the supervision and monitoring activities. Similarly, delay in the preparation and approval of planning of the last fiscal year was part of the challenge. Lastly, delay in submitting the audit report to the Embassy of Finland was noticed.

The second day of the workshop was dedicated to planning for the current Ethiopian fiscal year. The approved budget for 2016/17 fiscal year is 26.6 million Birr. The planning includes the activities to be implemented in all districts.