Amhara Community-Led Accelerated WASH (COWASH) conducted a review and planning workshop on 1st and 2nd of December 2016 in Bahir Dar city. The main objective of the annual meeting is to evaluate performances of the last fiscal year and planning activities for the current fiscal year. 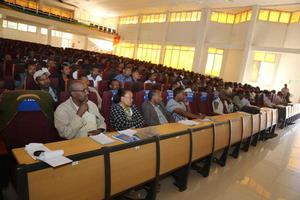 Abraham Mengesha, the Deputy Head of Amhara Water, Irrigation and Energy Development Bureau, made an official opening speech and commended all the stakeholders at all levels for the impressive work they have put together over the years. The Deputy Head also underscored the need for urgency in implementing the ongoing fiscal year activities as the planning is already late. Meanwhile, Mr. Mengesha also applauded the effectiveness of Community Managed Project (CMP) approach which he strongly recommended for another development endeavors.

Abrham Kebede, Amhara Regional Support Unit Team Leader, presented the achievement report of the last two phases of COWASH (2011-2016). His report indicated that Amhara COWASH made tremendous progress in providing communities with access to safe water. Over the last five years, the project constructed 7759 communal water points which are more the planned 5915 water supply schemes. It was reported about 1.9 million people are currently benefiting from these safe water supply facilities.

The event also underscored the remarkable progress made in improving the functionality rate of the safe water supply schemes. According to the report, about 95.9 % of safe water points constructed using CMP approach are functional. The project is also hailed for its contribution in reducing open defecation practices. So far 747 kebeles are declared Open Defecation Free (ODF) in 40 COWASH districts. About 626 of them are COWASH kebeles.

In the last five years, the project was able to construct about 449 water points in schools and health institutions that are way below the planned 810 institutional water points. Low community contribution was mentioned as the major reason for the underachievement of the plans. Low of prioritization of the institutional WASH by the stakeholders was also stated as other important challenges that downplayed the achievements.

The achievement of the last phases in providing schools and health facilities with improved sanitation and hygiene services is also unsatisfactory. Out of the planned 140 about 128 improved institutional latrines were constructed. It was reported that currently nearly 80,000 people are using these facilities. Low level of priority from and poor integration of the sector offices and bureaus were reported to be main impediment for this underperformance.

The team leader also briefed the participants the progress made in building the implementation capacity of the sector actors. According to Abraham, all the planned procurements were made. Similarly, all the planned human capacity building activities at the regional level were conducted successfully. In general, with regard to the number of people trained, the project achieved more that it had planned. 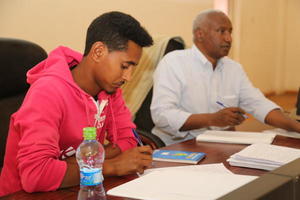 Challenges that hampered further progress were also discussed by the team leader. Amhara Drilling Enterprise’s inefficiency in drilling wells was mentioned as the major constraint that dragged the drilling activities behind the schedule. WASHCOs’ refusal to pay for abandoned wells that caused delay in payment was also a major challenge. Another bottleneck is the incompatible database recording and reporting that resulted from not following the CMP guidelines properly.

Muluneh Genetu, Monitoring and Evaluation Specialist of the Regional Support Unit, briefed the participants on the 2009 Ethiopian fiscal Year Plan. He said that the project plans to construct about 944 safe water supply schemes in this fiscal year. The plan is also to rehabilitate 88 water schemes. Other target of this year is to complete the construction of 48 rolled over safe water supplies. In the same year, the project aims to construct 21 institutional latrines.