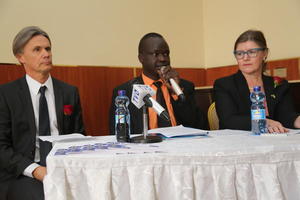 The COWASH (Community-Led Accelerated WASH) project, jointly owned by the Finnish and Ethiopian governments, recently launched ‘Phase 3’ of its 880 million Br programme in Ethiopia. The project was launched on November 24th, at a workshop at Getfam Hotel.

WASH projects have become more significant in the aftermath of the current outbreak of acute watery diarrhoea (AWD) in some parts of the country. Part of the government led response is support for the bilateral COWASH programme. As of October 2016, there were around 21,220 AWD cases reported nationwide – up from around 2,200 cases reported in June 2016.

Funding for the COWASH project comes primarily from regional governments and the communities in which WASH projects are being implemented.

“It has brought about a visible difference,” said one workshop participant, who works with the project at the regional level. “However, it has been difficult to come up with the funding at the woreda level.”

So far, regional governments in Amhara, Tigray, Oromia, SNNPR and Benishangul Gumuz have contributed a total of 58pc of the budget for the third phase of the COWASH project. Beneficiary communities contributed 10pc, while the Finnish government contributed 32pc.

“There are many hygiene and sanitation related diseases in Ethiopia at the moment, including AWD,” says Jane Bevan, manager of the UNICEF rural WASH programme. “Anything helps, but especially a programme like this that emphasises community ownership.”

The funds for the COWASH project are funnelled directly to community members through microfinance institutions, which is a model that hasn’t been implemented by many other NGOs because of the financial regulations that apply to NGOs and aid agencies. NGOs can’t normally disperse funds through a third party.

For this project a cooperation between the Ethiopian and Finnish governments diffrent regulations apply.

“MFIs are much closer to rural communities than banks can be,” Arto Suominen, Chief Technical Advisor from Ramboll Consulting. “Since this is a bilateral project, we can just send the funds through the MFIs to the community who carry out the actual work of supervising and planning the building sanitation and water infrastructure.”

COWASH is a bilateral WASH project between Finland and Ethiopia that began in 2011. It covers 76 woredas in five regions across Ethiopia. Out of the nearly 21 billion Br that has been raised from both governments and the beneficiary communities, about 880 million Br has been earmarked for this phase of the project.