Community-Led Accelerated WASH (COWASH) project in Tigray region conducted annual review and planning workshop from 13-14 October 2016 in Mekelle, the regional capital city. The annual workshop was organized to review the 2015/16 performance and plan activities for 2016/17. 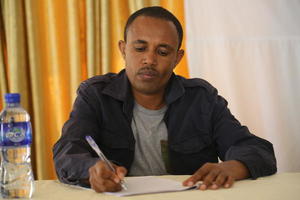 Tesfalem Hadgo, deputy head of the Water Resources and Development Bureau, who chaired the workshop, stated that the objective of the meeting was to review the last fiscal year’s performance whereby challenges and lessons would be identified. He further underlined that planning activities for 2016/17 budget year was also another focus of the meeting.

Following Tesfalem’s brief opening remarks, Solomon Gebretsedik, Regional Support Unit’s (RSU) team leader, took to the stage to present the annual performance of COWASH in Tigray. The project constructed 118 communal safe water schemes out of the planned 195 in the last fiscal year, 60.51% from the plan. From the planned 34 institutional safe water schemes only 7 were constructed; which is a 20.6% achievement. Altogether, both the newly constructed communal and institutional water points have benefited close to 30,000 people. Last fiscal year also saw a construction of 13 institutional latrines against the planned 22. Lack of enough budget due to food emergency was mentioned as major reason for this underperformance.

By supporting the acceleration of Community-Led Total Sanitation and Hygiene (CLTSH) approach in household sanitation and hygiene development, COWASH planned to declare 32 open defecation free kebeles whereas it only achieved ODF in 17 CMP kebeles. 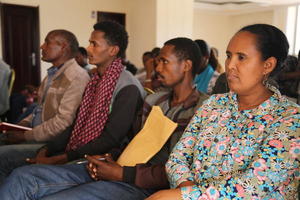 In human capacity building, out of the planned 27 training topics, 23 were offered to the concerned groups at the regional level and the seven target districts. Despite not offering all planned trainings, 4,547 people were trained which is more than the total 3,736 people planned for all the training topics. The increase in the number of trainees raised serious concerns as to whether the region is maintaining the training standards.

After the regional annual performance presentation, Arto Suominen, Chief Technical Advisor of COWASH Federal Technical Assistance Team, highlighted the achievement of COWASH in the last 5 years and called upon the regional team and district level experts to make concerted effort towards achieving the targets.

In his appeal to the audience, Mr. Suominen underlined some of the important new features in COWASH Phase III. The inclusion of people with disabilities, mainstreaming gender and establishing micro and small enterprises (MSEs) in sanitation marketing and operation and maintenance are the peculiar features that need special attention in the current phase.
According to the performance report, COWASH established a pilot sanitation marketing micro and small enterprise in Medabayzana district. In addition, pilot water safety planning was conducted in Tahtay Maichew woreda. Further interestingly, in the last fiscal year the community contribution showed a sharp increase. 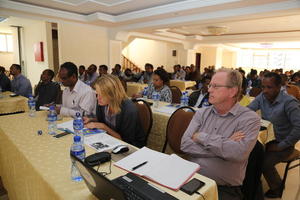 Ineffective and inconsistent support by the District WASH team was among the major challenges that hampered the provision of safe water supply schemes through the Community Managed Project (CMP) approach. This challenge was further heightened by a low level of integration among the sector actors at all levels. As a result, joint monitoring and evaluation of the projects in the community and institutions was not conducted. Not properly using the standard database was another challenge observed in most of the COWASH districts. Delay in budget transfer and procurement also slowed not only the implementation but also the provision of technical support.

Concluding the two-day workshop, Tesfalem Hadgo, the deputy head of water resources and development, reinstated that due to COWASH intervention, thousands of people have got access to safe water supply. He also seized the opportunity to call upon the participants to work further to ensure safe water supply provision.

It is to be recalled that Tigray National Regional State started COWASH project in 2011 in Ofla and Endamehoni districts. The project then expanded to 5 other districts making the total COWASH districts in the region 7. Up until now, the project has contracted 481 communal and 32 institutional water points whose total beneficiaries are 93,629 people. Over the same period, 46 institutional latrines were also constructed by COWASH.