A team of eight Finnish Members of Parliament (MPs) led by Mr. Mika Niikko, along with the delegation which was led by H.E. Sirpa Mäenpää, Finnish Ambassador to Ethiopia, paid official visit to Amhara National Regional State of Ethiopia on 6th and 7th of April 2016. 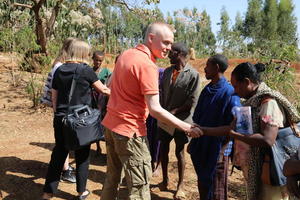 These MPs who are members of the Finance Committee and the delegation from the Embassy of Finland in Addis Ababa were officially welcomed to Bahir Dar, the regional capital city, at the gala dinner on evening of 6th of April, by a regional team led by H.E. Yaye Addis, Head of Office of the Regional National President.

Mr. Yaye, who recalled the historic and strong development cooperation between Finland and the region, said the support from Finland has transformed thousands of lives by providing access to safe water and improving the livelihoods.

H.E. Sema Tiruneh, Special Advisor to the President and member of the welcoming team, also noted Finland’s support in addressing some of the major developmental bottlenecks of the region.

H.E. Girma Tesfaye, Deputy Head of Bureau of Finance and Economic Development, who also made a welcoming speech on the occasion, praised Finland who, particularly in the implementation of Water, Sanitation and Hygiene (WASH) facilities, has pioneered an innovative and a community friendly approach which is known as Community Managed Project (CMP).

Next morning, the visitors were briefed about the Finland supported projects in the region at the Exhibition Hall in Avanti Blue Nile Hotel. Agro-Business Induced Growth Program (Agro-BIG), Community-Led Accelerated WASH (COWASH), Responsible and Innovative Land Administration (REILA) and General Education Quality Improvement Program (GEQIP) were the major projects on display during the morning presentations.

After the end of the exhibition, the parliamentarians and other guests travelled to the COWASH site to visit a safe water supply scheme that services more than 300 people in Yeloma kebele of Bahir Dar Zuria district. While introducing the objective of the visit to the members of the community who were welcoming the visitors, Mr. Mika Niikko, the team leader of the MPs, reiterated that Finland is still committed to supporting the community in the provision of access to safe water and improved sanitation and hygiene services.

Before they departed for Agro-BIG site to visit the Seed Production and Marketing Cooperative in Kundi kebele of Maharawi district, the visitors had a chance to see a household and its latrine at the COWASH site.  Ambo Mesk primary school where General Education Quality Improvement Program is being supported by Finnish government was also among the sites visited. Before the end of the conclusion of the official visit, the guests visited land area measurements in action and talked to the local Land Administration