Ministry of Water, Irrigation and Electricity in collaboration with water sector actors marked World Water Day on 22nd of March 2016 in Addis Ababa. The event, which was celebrated with the theme ‘Water and Jobs’, aimed at facilitating discussion and action towards safe water provision and job creation.

H.E.Mr. James Dengchol Tot and H.E. Mr. Kebede Gerba, state ministers at the ministry, were attending the celebration. In addition, more than 500 participants celebrated World Water Day which was organized held in the meeting hall of the Ministry of Water, Irrigation and Electricity. 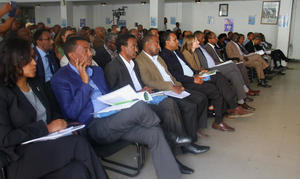 H.E. Mr. Tesfaye Fichala, chairperson of the organizing committee of the national world water day celebration, stated that implementation of safe water supply is understood to be another important sector for employment creation. “Beyond proving the health for the community, provision of safe water supply creates jobs for thousands of unemployed youths in the country. Thus why we repeatedly say ‘access to safe water has both health and development impacts’,” say the chairperson.

H.E. Mr. James Dengchol Tot, state minister of Ministry Water, Irrigation and Electricity, who was the guest of honor, said that Ethiopia reached, as per the standards of the Growth and Transformation Plan (GTP) I (2010-2015), 82% of the population with safe water. Ethiopia is one of the countries that successful met the Millennium Development Goals (MDGs) which was concluded in 2015 according to the state minister.

At the end of GTP II (2015-2020), Ethiopia plans to provide 20 liter safe water per capita per day within one kilometer radius in a rural setting. With GTP II standards, the plan is to reach 85% rural Ethiopia with safe water while 75% of urban residents in the country.

The celebration that started on the previous day with panel discussion on achievements of safe water provision has still continued with exhibitions. Public, private and NGO organizations are displaying their products and messages for visitors.

It is to be recalled that World Water Day was first celebrated on 22nd of March 1993 following UN’s Rio Declaration on Environment and Development in 1992.  Since then it has been marked for 24th time globally and 23rd round nationally.