Ministry of Water, Irrigation and Electricity in collaboration with stakeholders which includes COWASH have marked the International Women’s Day, which is commonly called March 8, on March 8, 2016 in Addis Ababa. The annual event which has been observed for the 40th round in Ethiopia was celebrated with the national theme, ‘promoting good governance to ensure equality and inclusion for women.’

Tesfaye Fichala, the representative of His Excellence Mr. Motuma Mekassa, Minister of Water, Irrigation and Electricity, said that though government of Ethiopia has adopted rights and directives and taken concrete steps towards ensuring women empowerment, there is a long way ahead in ensuring equality and inclusion. In his opening remarks, Tesfaye strongly called up on the ministry and stakeholders to work towards this target while sustaining the current achievement.

Lakech Haile, Director of Women and Youth Affairs Directorate, who also made an opening speech on the ceremony underscored the need to tackle the bad governance that partly downplays the women’s active participation and contribution in the country’s development. While celebrating the thus far accomplishments, she emphasized the importance of stakeholders’ collaboration and concerted effort to create an enabling environment for equality and inclusion of women to take root in a male dominated society. 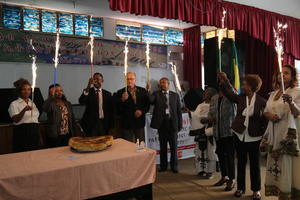 The colorful day was attended by more than 500 people, mainly from the ministry. The Yegna music band, a group that works to promote the empowerment of women entertained the participants with the music. In addition to the lists of events that took place on the occasion, women who retired during the last fiscal year were honored for their long service and dedication. Similarly, in order to encourage women’s education, those who completed their further studies were also acknowledged.

Besides this celebration, sponsor organizations had organized an exhibition where participants were introduced with the missions and objectives of the organizations. COWASH which also took part in exhibition was not only the major financial sponsor of the ceremony but also the member of organizing committee.

It is to be recalled that COWASH has been the regular partner in organizing and celebrating the International Women’s Day at the ministry. Empowering women is one of the main target goals of COWASH. As a rural WASH project in Ethiopia, COWASH supports the implementation of Community Managed Project (CMP) approach where active participation of women is a precondition for the sustainability of the water and sanitation services also in the future.