Government of Finland supported Ali spring water supply gravity scheme rehabilitation in Pawe district of Metekel zone in Benishangul Gumuz region was inaugurated on 22nd of October 2015. The rehabilitation of the gravity scheme which had been undergone from June 2014 to July 2015 was supported financially and technically by FinnWASH-BG (2009-2015), a bilateral project between governments of Finland and Ethiopia, using the community managed project (CMP) approach. 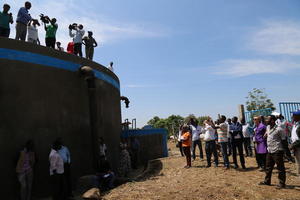 Ms. Sirpa Mäenpää, Finland Ambassador to Ethiopia, believes that this achievement is the fruit of the long term development cooperation between the two governments and people. “The governments of Ethiopia and Finland cooperated in putting their finances and forces together and coordinated with the communities for a long term development to ensure the right of the people for clean water,” says Ambassador.

The significance of the project goes beyond the provision of access to safe water for Awake Asheshum, head of Bureau of Water, Mines and Energy Resource Development of Benishangul Gumuz regional state. The bureau head is convinced that the availability of safe water in users’ villages enables women to contribute to the social and economic development of the communities. “In addition to reducing the waterborne diseases and time and energy spent on searching for water, the scheme plays significant role in maximizing the women’s social and economic contribution by easing the work burden on them,” says Awake.

The event also showed CMP approach is successful applicable in the implementation of high technology safe water supply scheme. The success in the rehabilitation of the Ali spring demonstrated capability of the community to implement and managed high technology schemes with the provision of appropriate capacity building activities and technical support from the local government. “Ali spring showed that it is possible that communities manage even such rehabilitation activities,” says Ambassador. She continues, “It is important that this scheme is community managed. We believe that when communities have high sense of ownership, they know that they are responsible to maintain and expand.”

Pawe district water users association with seven executive members is in charge of the operation and maintenance of this water supply. The association is responsible to the district general assembly which has 56 members representing 28 water, sanitation and hygiene committees (WASHCOs). With administration and finance, and technical departments the water users association has been established as a legal enterprise.  Ensuring the functionality and sustainability of the scheme is the major responsibility of the association which was got a legal personality. 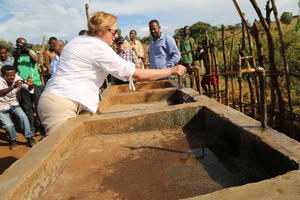 It was also noted that the role of the communities in the operation and maintenance of the water points. “User communities are responsible in ensuring the functionality and sustainability of the scheme through guarding, maintaining and using the taps responsibly,” says Shiferahu Chelebo, the regional head of Bureau of Finance and Economic Development and representative of the office of the president of the region.

Ms. Tiina Byring- Ilboudo, councilor at Finland Embassy in Addis Ababa, calls up on the community to protect the source of the spring by planting trees. “The safety of this area is one of the keys of the whole functioning of the water scheme and the guaranty that there would be clean and safe water for 40,000 people in the area,” says the councilor. In line with this protective forest has been planted over 10 hectare of land around the source.

It is to be recalled that regional support units from Community-Led Accelerated WASH (COWASH) regions were invited not only to attend the inauguration but also to share the experience regarding the application of CMP approach with the implementation of high technology schemes. By successfully implementing and operating high technology water supply schemes, FinnWASH-BG program has dispelled the notion that communities cannot manage such large and complex schemes. This is very important lesson that guests take home from this visit.

In related news, FinnWASH BG that comes to end as of October 2015 has reach nearly 91% of the people of the five districts in Metekel zone with safe water. The regional authorities praised the program for its contribution in increasing the sanitation and hygiene coverage of the zone to 75.6%.  It was also reported that in January 2015 when about 86 % of the FinnWASH BG supported schemes were surveyed, it was found that about 88.4% of these facilities were functional.