The project which was running from July 2009 to June 2015 was supporting the implementation of community managed safe water supply and improved sanitation and hygiene services in Pawe, Mandura, Bullen, Dibate and Wombera districts of Metekel zone. Technical Assistance to the project was provided from Niras Finland. 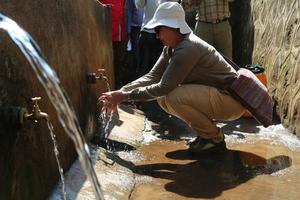 In addition to supporting the construction of low technology schemes such as hand dug wells, the program was also implementing rural piped high technology water supply schemes in different projects areas in the target districts. According to the final report, the project was able to construct 996 communal water points.

The success in the rehabilitation of the Ali Spring Gravity Scheme demonstrated capability of the community to implement and manage high technology schemes with the provision of appropriate capacity building activities and technical support from the local government. “The project proved that it is possible that communities manage even such rehabilitation activities,” says Ms. Sirpa Mäenpää, Finnish Ambassador to Ethiopia, who was visiting Metekel zone when the rehabilitation of Ali Spring Gravity scheme was inaugurated on 22nd of October 2015.

It was reported that due to this project about 91% of the people in the project area have got access to safe water. Safe water coverage in schools has increased from nearly 0% to 68% while that of health posts has grown to 60%.

Similarly, about 48% of the schools got Ventilated Improved Pit Latrines whereas 82% of the health institutions got access to improved sanitation and hygiene facilities.

January 2015 when 86% of FinnWASH-BG supported schemes were surveyed, it was found that about 88.4% of these facilities were functional. 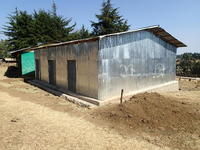 Spare part stores are able to order parts in larger quantities and thus able to negotiate better prices. Stores are located near to end users to assure the availability of the spare parts.

Spare part store is owned by WASHCOs who will also employ the storekeepers. Once staff is recruited it can start to order parts which will then again be sold to WASHCOs.

Handpumps need regular maintenance and its normal functionality reguires changing of parts which wear out, such as bush-bearings. Functional operation and maintenance process is needed to assure the future sustainability of the facility.

Minister’s visit included short briefing of the five projects followed by field visits to project sites. Unfortunately FinnWASH sites were too far to be reached in one day visit so COWASH site had to play the also the role of FinnWASH site.

One day visit was hectic but very well mastered by organizers. Special thanks goes to Agro-BIG-project which held the main responsibility of the program. Minister and the entourage were pleased about the day’s outcomes.

Ali-spring gravity scheme was originally built by Italians in 1980’s. It served approximately 20 000 people in communities in Pawe-woreda. After the Italians left the scheme was left without maintenance.

In the preparation phase of the FinnWASH-project there were feasibility-, social & economic- and independent evaluation- studies conducted to rehabilitate this relatively large scheme. Eventually in May 2014 FinnWASH started the physical rehabilitation and the establishment of the Ali-spring water user association.

Construction works at the different points of the scheme are proceeding timely and efficiently. 500 cubic meters reservoir under construction is ten times bigger comparing to regular 50 cubic meter tankers. It has been told to be the biggest water tanker in the Benishangul-Gumuz -region. 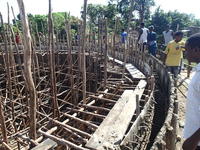 Contractor had hired approximately one hundred local people to work on the construction site. With 60 birr daily salary (approximately 2 EUR) the local people seemed more than happy to work in the site which will be eventually serving 20 000 people again in Pawe-woreda.

Finnish ambassador Sirpa Mäenpää and counselor Marko Saarinen were officially opening Galessa water scheme on 17th of June 2014. Rural town of Galessa has now a mid-size water scheme with a 60 meter deep borehole as a water source. 47 kw Generator is powering submersible pump which pumps the water with 600 meter pressure line into 50 cubic meter reservoir. New reservoir was built next to old 50 cubic meter reservoir which needed repair. After maintenance of the old reservoir there will be 100 cubic meters of water storage capacity. 2,5 km Gravity line starts from the reservoirs and leads to Galessa. In the town there are seven public water points and connections to two schools, health center, and to public shower. Scheme is operated independently by Galessa-water user association which has its legality and own bylaws. Scheme serves currently 4 800 people and about 1 500 pupils in schools. It is expected to be sustainable minimum of twenty years. Government of Finland’s contribution was 116 000 € and Galessa community’s 14 600 €. 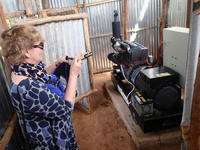 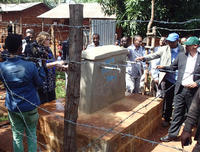 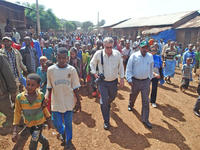 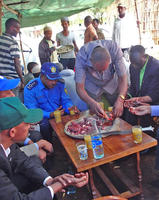 Local delicacy raw meat was served at the after party

Berber scheme supports all the inhabitants of the ~2200 people town. Scheme includes submersible pump with generator, reservoir, public shower house, and eight public stands (bonos) with four taps each . The Berber scheme is ready but the bonos are not giving water. Gate valves were closed due to leaking taps. All gate valves in eight bonos were tested and water was running with good pressure. Ordering and installing of the new taps was organized which will make the scheme operational. 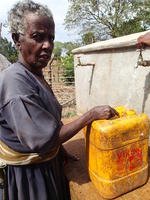 Water user arrived when testing the gate valve in Berber

Second visit was made to Galessa scheme which has similar construction to Berber.Also there the taps were leaking specially at protected spring next to pump station. There were also some leakages on pipelines between the generator and pump station and also in the start of the mainline to town from the old 50 sq m tank which will be left as an extra reservoir in future. These will be relatively easy to fix by tightening the connections. Problems were noted and will be addressed as soon as possible. 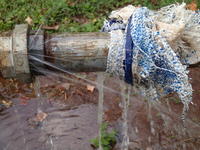 Gesengesa scheme is still under construction. It will serve ~ 1300 people in town, ~ 650 pupils in school and ~ 150 patients in health center when finished. Scheme includes pump station, public showers in town and in school, public bono and also bonos in school and in health center. Solar power generator will be used as an energy source for the pump, but it is still yet to be installed. 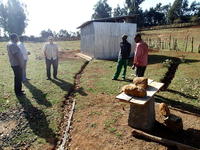 Gesengesa 50 sq m reservoir was built by using local artisans without the help of external experts which will add to local capacity building. Tank looked well made in visual examination. 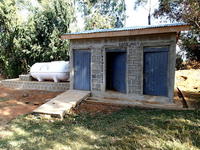 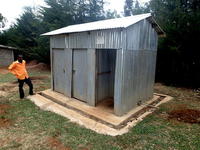 Scheme has leakages in the feedline from the pump to reservoir. The contractor has been contacted to tighten the leaking connections before handover. Also gate valve at the elementary school needed to be changed. 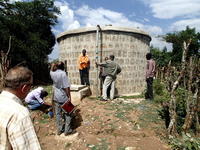