Finnish opinion leaders and decision makers visited Ethiopia on January 12-16, 2014. Delegation consisted five members of Finnish Parliament, five business leaders, three editor-in chiefs and five prominent civil servants from the Ministry for Foreign Affairs of Finland, Finland Ambassador Ms Sirpa Maenpaa and Counsellor Marko Saarinen. The delegation visited COWASH Hand dug well site in Awzet Kebele of Farta Woreda in South Gondar zone of Amhara Region and Tana Beles Integrated Water Resurce Development Project site in the same woreda. Along the road the project sites of Agro-Big Program and REILA project in Fogera woreda were visited. The feedback received from the visitors was positive. Marko Saarinen from the Embassy of Finland wrote the following remarks after the visit:“I would like to thank you on behalf of the Embassy of Finland for the successful organization and facilitation of the visit of the delegation of Finnish decision-makers and opinion leaders to the Amhara Region. The feedback on the visit has been overall very positive and the work presented in the project sites has been appreciated, as well as all the effort you have put in to organize the visit.” 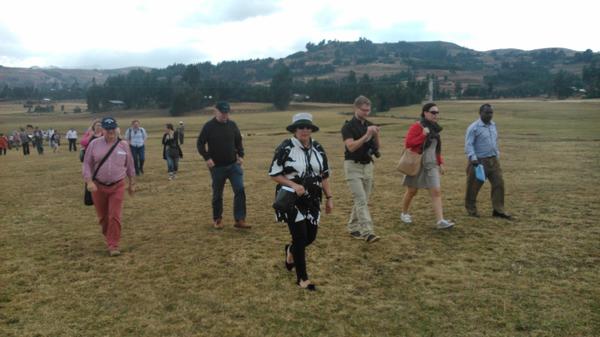 Members of Finnish Parliament and other visitors walking to the water point. Photo by Arto Suominen.